Fairy Houses for our Neighbors

All spring, the children have been building fairy houses using wood and foam board. They sketched their designs, cut wood, hammered, glued, painted, and solved problems that they ran into along the way. They used clay to make fairies, gnomes, and flowers to inhabit the houses.

On Friday, a group of Arts & Smarts participants walked to the Rathbone Retirement Community on Second Street to install some of the fairy houses in the garden area. The idea is that the Rathbone’s residents will discover these small dwellings tucked into the landscaping as they walk around the garden. Hopefully they will be intrigued, look more closely, and notice the details that the kids have added to each one.

Residents of the Rathbone gathered in the garden to greet us and the kids paraded the finished houses for them. Then the residents went indoors for supper while the kids moved around the yard to find the perfect shrub or leaf for their houses to hide under.

We all admired our work, then went inside to share a pizza dinner with the Rathbone residents.

It was a fantastic afternoon. The houses came alive when nestled in the garden. The Rathbone residents (including long-time Patchwork volunteer Helen Belleville) smiled and chatted with the kids. And the kids carried on great conversations with the residents, the Arts & Smarts staff, and each other. They were polite, kind, respectful, and took pride in their artwork. It was a special day.

**And don’t forget, you can purchase some of the kids’ artwork to install in your own garden at Patchwork’s Pancake Extravaganza this Saturday (April 22) from 7:30 am-11:30 am!

Notes from 40 Years at Patchwork: 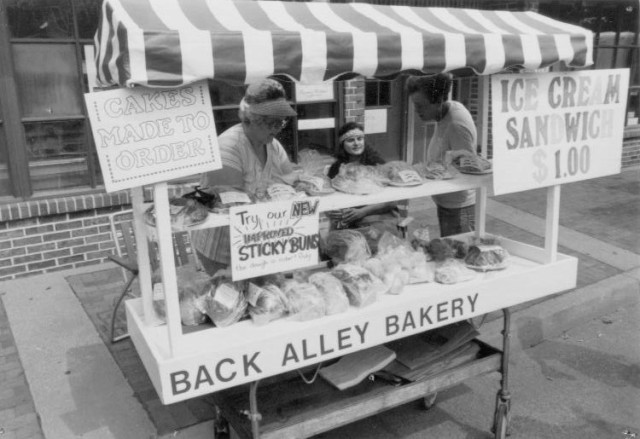 Patchwork opened its Back Alley Bakery in 1982. Still remembered fondly for its potato bread, motivation for the project was to provide training and jobs for people who lived nearby. Judi Jacobson was the bakery manager and Darlene Blagg was the head baker, the first paid employee.

Among the many stories still told about the Bakery is the one about the mobile bread cart built from a hospital gurney. In the September 1983 Patchwork newsletter, Phil Amerson said this of that cart:

In this invention, this hospital-gurney-turned-bread-cart, jobs were being created, lives were being changed, and hope was emerging. We were able to participate in something very rare… we committed ourselves to something we could not fully control. If we were to succeed, it would be because of a fine human gift:  imagination. And seeing the transformation of such a small item which meant so much to us and our neighborhood, we were reminded of the potential for change for all of God’s world. We had no certainty we could bake bread, sell bread or see people employed, but it was happening. A leap was made for others and for ourselves; we had made commitments we could not fully control and imagination emerged. These may well be the fundamental elements for discovering the ongoing renewal the Creator would have for our world.